Artefacts Of The S&DR 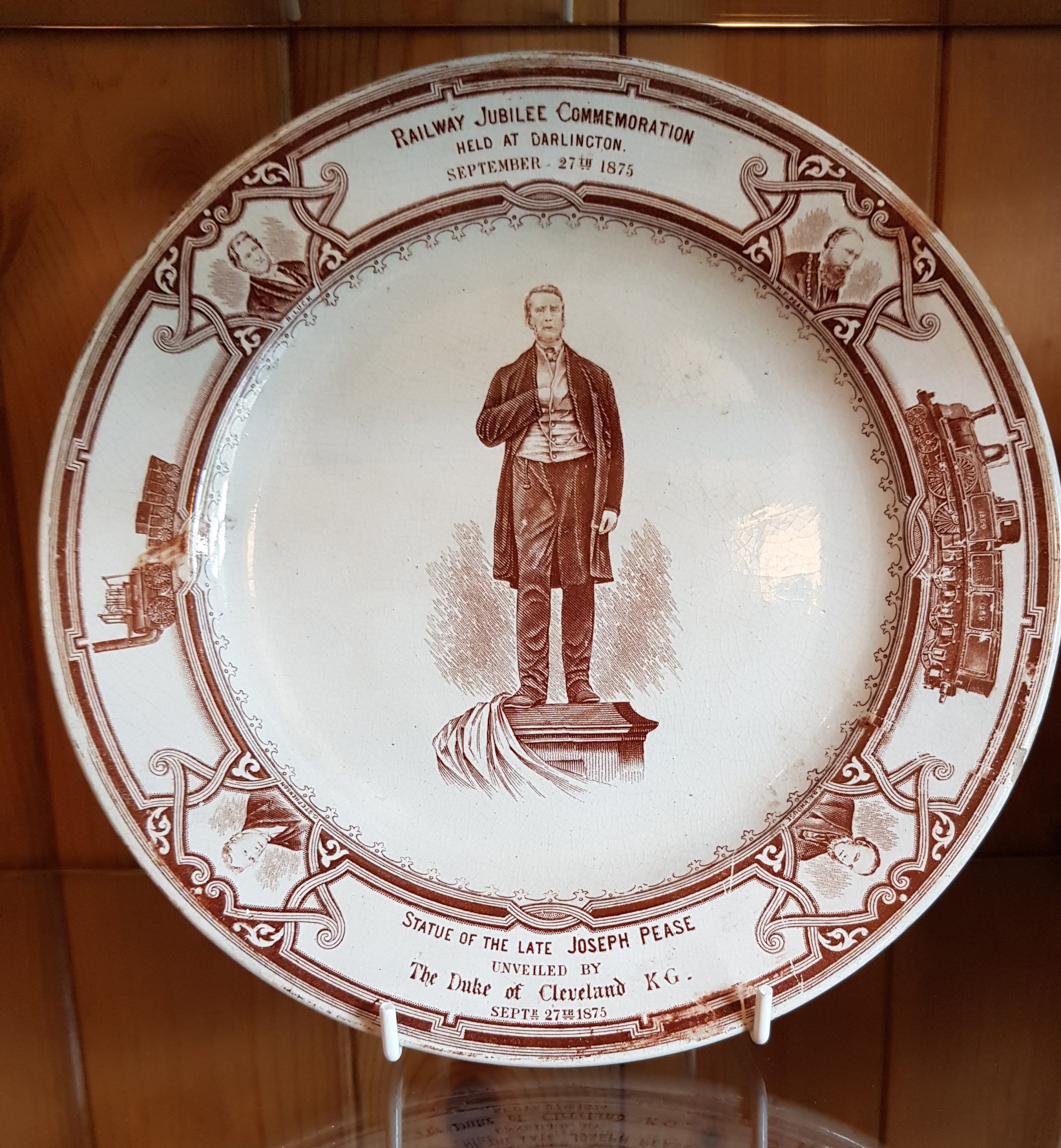 This is a plate designed to commemorate the unveiling of the statue of Joseph Pease. The statue is situated at the east end of Prospect Place, at the junction with Prebend Row, High Row and Northgate in Darlington. It was unveiled on the 27th September 1875; the Stockton & Darlington Railway’s Jubilee.

The plate has an image of the statue in the centre and around the circumference are pictures of other leading lights including Henry Fell Pease (MP for Cleveland, Yorkshire), Edmund Backhouse (MP for Darlington), George Stephenson (no introduction required!) and R. Luck (possibly Richard Luck representing St. Cuthbert’s parish). Two locomotives are also depicted – Locomotion No.1 from 1825 and possibly No. 1269 built in November 1874 at the North Road Works in Darlington and representing the latest in locomotive development (thank you to Barry Thompson for tracking down this locomotive in Pearce 1996, fig 219).

The statue is an electroform casting – zinc dipped in copper – one and a half times life-size (approximately 9ft). Pease is represented in middle age, wearing a Quaker lapel-less coat. He stands with his left hand at his side and his right tucked into the breast of his waistcoat, a pose he often assumed when speaking in public. The pedestal, not shown on the plate, is in two parts; the plinth, of grey granite, supports a decorative base of polished pink Shap granite with colonnettes at the corners. Set into each of the four sides of the pedestal is a bronze relief panel representing different aspects of Pease’s public life including his railway and coal interests, education and the abolition of slavery.

A Pease Memorial Committee of 43 local businessmen was formed soon after Pease’s death in 1872 with the object of commissioning a painting for the town hall, and a statue. The sculptor, George Anderson Lawson, originally from Edinburgh but based in London from c.1862, is thought to have used a photograph of Pease aged 63 as his model; the foundry was Cox and Sons.

Funds were quickly raised, and the statue was unveiled on the fiftieth anniversary of the opening of the Stockton and Darlington Railway. The day was declared a public holiday throughout the district; 100,000 people are said to have filled the streets, 80,000 arriving from out of town in special trains. All the mayors of the United Kingdom were present for the unveiling of the statue, a service performed by the Duke of Cleveland, whose family had, over the years, attempted to thwart the development of the Peases’ railways. His name is at the foot of the plate.

The plate belongs to Andrew Stoves.

← 1875 S&DR blue riband Locomotion No.1 and the Bulmer Stone Plaque →
We use cookies on our website to give you the most relevant experience by remembering your preferences and repeat visits. By clicking “Accept All”, you consent to the use of ALL the cookies. However, you may visit "Cookie Settings" to provide a controlled consent.
Cookie SettingsAccept AllReject All
Manage consent