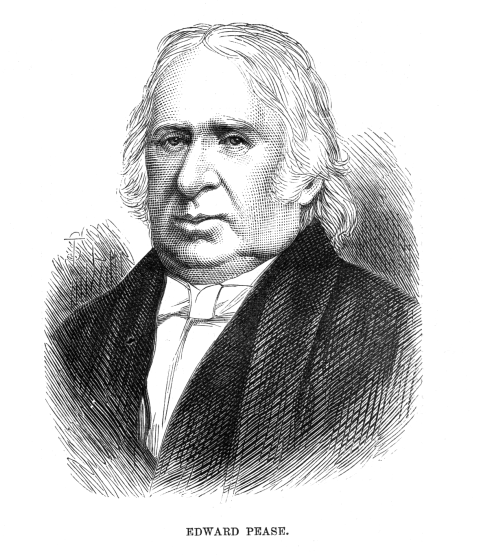 Edward Pease was born on the 31st May 1767 to Joseph Pease and Mary Richardson, prominent Quakers in Darlington. He boarded at school in Leeds and then joined his father in the woollen business at the age of 15. He married Rachel Whitwell from Kendal in 1796. While living in Skinnergate in Darlington they had their first three children John, Rachel and Joseph who was born in June 1799. In December of that year, Edward purchased two properties on Northgate in Darlington, and these would be the Pease family home until his death in 1858. Young Edward Pease was born in 1801, Mary a year later, Elizabeth in 1803, Isaac in 1805 and the youngest Henry in 1807.

Edward Pease is often referred to as “the father of the railways”. In fact, he was retired when he became active in the development of the railway, although his work in the woollen business which involve considerable travel had helped him appreciated the need for a good transport network.

Local business owners also seeing the need for an improved transport network particularly between the hillier SW Durham and the larger towns of Stockton, Darlington and Yarm disagreed whether canals or railways, also known as tramroads, might offer a solution.   While there was disagreement, there was no solution. Pease broke the deadlock by commissioning an independent report which favoured the use of a horse drawn railway.

The Stockton & Darlington Railway (S&DR) Company was formed. Edward’s son Joseph wrote the company’s prospectus when he was only 19 years old. Although the company was funded through shares and run by a Committee, Edward was the main financial backer of the railway and as such held considerable influence over its development. He, together with his Quaker banking friends and family, had the capital to take forward the vision of a permanent transport infrastructure capable of being extended across the country.

George Stephenson was already an engineer of some renown on Tyneside. He had built successful locomotives at Killingworth Colliery and recently designed the Hetton Colliery Railway near Sunderland. Edward Pease knew of Stephenson and his work and was curious to see if steam engines would be more efficient than horses. In turn Stephenson had heard of the proposed S&DR and believed that steam engines would be quicker and cheaper than horses as proposed. After a few meetings, including the legendary one where Stephenson and his friend and collaborator Nicholas Wood changed their footwear at the Bulmer Stone outside Pease’s home on Northgate before knocking on his door, Stephenson was appointed by the S&DR Committee to survey a revised route more suitable for locomotives and was later tasked with overseeing the changes necessary to the line including the design of many of its buildings and structures.

That first meeting in Pease’s house seems to have taken place on the 19th April 1821 and what is remarkable is that on that very day the Act of Parliament approving the horse drawn railway was approved on its third attempt. But now, another Act of Parliament would be required to approve the use of steam engines and locomotives instead – and this at a time when many people had no idea what a locomotive was! Pease chose to take a risk and get behind Stephenson and support the use of locomotives to power the railway and in doing so, set this railway apart from earlier railways. George Stephenson regularly visited Pease in his home on Northgate to provide updates on progress and they became good friends.

The locomotive powered Stockton & Darlington Railway got that second Act of Parliament in 1823 and the 26 mile long railway opened on the 27th September 1825. This was the start of something new. Yes, there had been railways before, but this was different. It was the start of the modern railway as we know it today. It carried anything including passengers in return for a fee. The public could use it if they bought a ticket and it provided a timetabled service that was quickly adopted by commuters and businesses. It was the start of a network that would spread across the country and then the world and opened up large areas of land to commercial exploitation leading to the second wave of the industrial revolution. Nothing would ever be the same again.

Once the S&DR was up and running, Edward Pease remained a committee member of the railway company but took a less active role in favour of his son Joseph who oversaw the railway’s expansion to Middlesbrough (and the creation of it planned railway town) and who went on to become an M.P for Darlington – the first Quaker to hold such a position. Edward’s youngest son Henry was also responsible for much of the railway’s later expansion to Saltburn, for example. So, the involvement in the railway was a family affair.

Edward’s wife Rachel died in 1833 when visiting friends in Manchester. Her body was brought back to Darlington and she was buried in the Quaker burial ground. Edward was devastated and sought consolation in his garden which extended down to the mill race then up the other side where he had orchards and pleasure walks. This became known as Peaceful Valley, playing on the family name. From 1832, his son John had a house built on the opposite side of the valley at East Mount and the two families could walk between their houses and across the millrace over a rustic bridge.

When he was ninety, some Darlington citizens led by his old friend Francis Mewburn who had been the railway company’s solicitor, started a campaign to recognise Edward’s contribution to the start of the railways by creating a memorial, possibly a statue. Edward vetoed this and only permitted a modest congratulatory address outside his house on Northgate.

“In times less enlightened and more prejudiced than these, with amazing foresight, you penetrated the necessity of unbroken communication by railways, and in 1818 predicted the extension of that system which now spreads a net-work over the civilised world, binding nations together for the interchange of mutual interests.”

(Part of the address given at Edward Pease’s House in Northgate, Darlington on the 23rd October 1857 as a public thank you from the people of Darlington and the pioneers of the S&DR to Edward Pease).

Edward Pease died in 1858 and was buried in the Quaker burial ground alongside three of his children and his beloved wife Rachel. His house was rented and briefly became a school. It was eventually sold and redeveloped in 1866 to form four shops at ground floor level and a unified classical frontage above with a central pediment masking the original two Georgian townhouses. Pease’s much-loved garden was developed for housing and light industrial uses. The classical frontage was disturbed in 1909 by the addition of an egg shell polished terracotta façade over the second bay and in 1923 another shop front on the south end of the building was heightened to the first floor. The frontage therefore lost the original Georgian appearance of Pease’s house, then lost its Victorian classical design. The late 20th century and early 21st century were not kind to the building. Little maintenance took place to the upper floors despite being listed. With broken and missing windows, unmaintained rainwater goods, a leaking roof, unkempt upper floor levels and blocked cellars, it was hard to believe that the father of the railways had lived here and that world changing events took place in this house. It is therefore exciting to know, that Darlington Borough Council have now bought part of the building and are looking at ways to manage it that might better reflect the world changing events that took place here.

← Thomas MacNay George Stephenson →
We use cookies on our website to give you the most relevant experience by remembering your preferences and repeat visits. By clicking “Accept All”, you consent to the use of ALL the cookies. However, you may visit "Cookie Settings" to provide a controlled consent.
Cookie SettingsAccept AllReject All
Manage consent