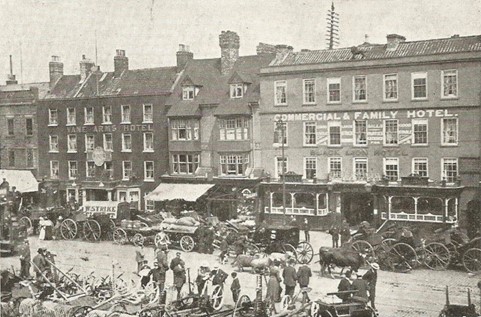 WOMEN are almost invisible in the history of the Stockton and Darlington Railway, such was the culture of the time. When they appear, it is usually as casualties (like poor Jane Lister, killed with her two children on the Darlington branch1) or as innkeepers succeeding a deceased husband (such as Jane Scott).

Martha Howson (1778-1832) was an innkeeper, and did indeed take over her inn from her late husband. But her name features probably more than any other woman in the evolution of the young Railway. Her inn also played a not-insignificant part.

The then Martha Ludley was born in Grantham, Lincolnshire in early 1778.2 She married George Howson, and around the beginning of 1810 they took over Stockton’s prestigious coaching inn, the Black Lion on the High Street.3 George passed away in 1820 but because of, in Martha’s words, his prior ‘lamented incapacity’ she had already ‘sustained the whole weight of the business by herself’. The business involved not simply operating the inn but the running of two road coaches and the hiring out of ‘post chaises, with able horses, and careful drivers’.4 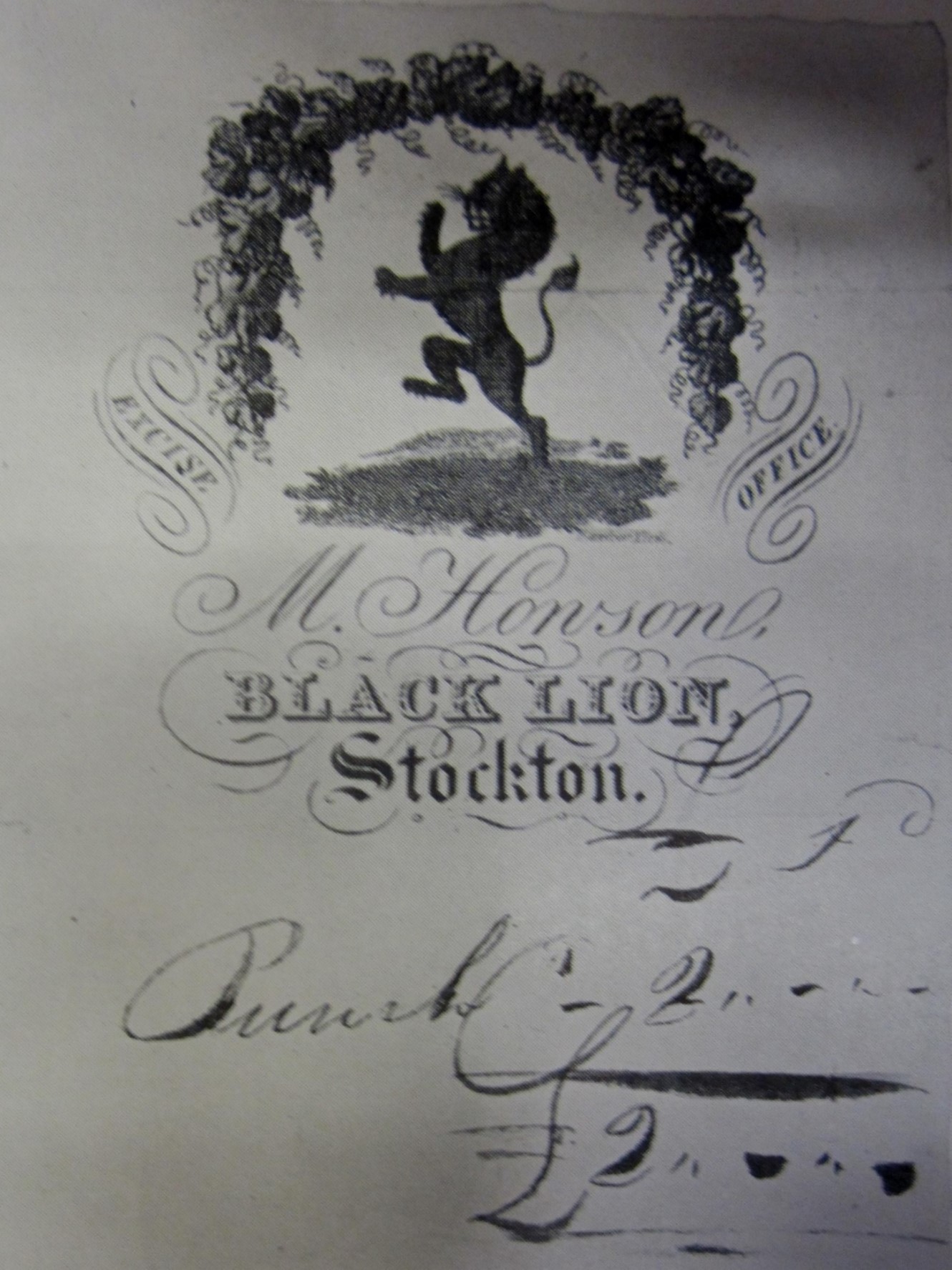 Her first link to the Stockton & Darlington Railway Company came as early as it could do, in April 1821 when the first Act for ‘making and maintaining a Railway or Tramroad from the River Tees at Stockton to Witton Park Colliery’ was passed by Parliament. To gain good access to the river for and from its proposed line the Company needed space to run its rails and open up the quayside behind the businesses and houses on the east side of the High Street. These were built on burgage plots than ran right down to the river. The Act gave the Company the power to acquire some forty consecutive small parcels of land (mainly individual wharfs) from their owners – and Martha Howson, by virtue of the Black Lion’s lengthy curtilage, was named in the Act’s schedule as an owner and occupier whose wharf was to be acquired.

The following year, just a few hundred yards away from the ‘house of Mrs Howson’, the alternative means of travel to the road coach began its tangible progress. There, next to St John’s Well, Thomas Meynell, chairman of the newly-incorporated Stockton and Darlington Railway Company, laid, with grand ceremony, the first iron rail of the projected railway. The ‘gentlemen’ of the ceremonial party proceeded thereafter to an ‘excellent’ dinner at the Town’s House (Town Hall) but the workmen weren’t to be left out – they were ‘plentifully regaled with bread, cheese, and ale, at the Black Lion Inn’.5

The spot where that first rail was laid – on the road to the county bridge across the Tees between Durham and Yorkshire – became known as ‘St John’s Crossing’, and Martha Howson played a part in its importance in Stockton’s railway story.

The railway’s final approach route to the proposed wharfs had been altered from the Company’s first Act of Parliament as one of the changes proposed by George Stephenson when tasked with improving on the 1821 line of George Overton. Stephenson explained that:

‘some Gentlemen of that place [Stockton] wished that the Line might be brought near to the Bridge end for the convenience of Coals that might have to pass to the other side of the River’.

This alteration and Stephenson’s others had required a second Parliamentary Act for new land to be acquired. Amongst this were eight adjacent fields (perhaps paddocks) between Yarm Lane (now Road) and Bowesfield Lane in Stockton owned by the Bishop of Durham but, as the statutory notice of September 1822 said, ‘now in the occupation of Martha Howson’.6

Without this deviation across Martha’s land the railway would have approached the wharfs closer to the High Street – and there would have been no St John’s Crossing, or coal depot or associated tavern near to the town’s ancient well. So here was Mrs Howson’s second (albeit modest) place in railway history.

Her next was via the part played by her inn, the renamed Black Lion ‘Hotel’, in the early days of passenger rail travel. The Railway Company had initiated passenger travel along the track in 1825 by running its Experiment coach from Durham Lane in Darlington to the quayside at Stockton. By late 1826, the owners of the larger town inns, witnessing the popularity even of depot-to-depot travel, decided to take advantage of the Railway’s open-to-all toll system to run their own coaches – but, crucially, for Darlington’s central inns at least, with the first and last parts of the journeys on road.7

Richard Scott of the King’s Head in Darlington was probably the first, running the Defence coach twice a day from July 1826 to the Black Lion in Stockton. The Defiance coach seems to have started on the same day on the same route,8 also run by Scott or possibly by Martha Howson herself, in partnership with Scott or simply taking a share of the receipts for booking passengers, receiving parcels, caring for horses, etc.

Then on 16 October 1826 Martha’s inn was the starting point (at ‘which passengers and parcels are booked’) for the heavily promoted ‘Elegant New Railway Coach’ the Union on its journey ‘on the Stockton and Darlington Railway’ calling at Yarm.9

Away from the railway, in September 1827 Martha received fulsome praise for her exuberant welcome to the Duke of Wellington on his visit to Stockton. The town was filled with flags, banners and bunting for the still-feted hero of Waterloo but:

‘the most tasteful display was that made by Mrs Howson, in the front of the Black Lion Inn. Along the parapet at the top of the house, bunches of laurel were placed, and immediately below appeared the word ‘Waterloo’, painted in yellow letters on a crimson ground (the colours of the Duke), under which hung a large flag of the same colours, bearing a motto, ‘See the conquering Hero comes’. The top of the sign board, which extends along nearly the whole front of the house, was decorated with bunches of laurel and flowers intermixed. The whole had a striking appearance and excellent effect’.10

Another visitor to Stockton – and Martha’s Black Lion – of more interest to railway historians was the ‘father of the railways’ Edward Pease. His great-grandson, Alfred, told of how when going through Edward’s papers he had come across:

‘what we should now consider a shocking consumption of liquor … a voucher of his for £2 paid for ‘Punch’ at the Black Lion at Stockton’.11

By 1827, the Railway Company was looking to extend its line to new coal staithes down river at Port Darlington, or Middlesbrough. Another Act of Parliament was required, and the acquisition of more land, including for the erection of a bridge between Durham and Yorkshire about 500 yards south of the old road bridge. Once again Martha’s name was mentioned in the S&DR’s formal notice of its application to Parliament. This said that the new bridge would span the Tees from ‘a certain close called Peel Nook, in the said township of Stockton … in the occupation of Martha Howson’ to Carrhouse Field on the Thornaby bank.12

In 1833, the S&DR bought out the private railway coach operators. By this time, in February 1832, Martha – still described as keeper of the Black Lion – had died, aged 53.13 After all her involvement in the early railway, it was her brother, William Ludley (who had succeeded her at the inn) who was awarded compensation of £20 by the Company – and had his name immortalised in its minutes.14

Brendan Boyle with additional research by Barry Thompson and Caroline Hardie. (This article was published in The Globe, April 2021)

← Joseph Pease Mary Simpson →
We use cookies on our website to give you the most relevant experience by remembering your preferences and repeat visits. By clicking “Accept All”, you consent to the use of ALL the cookies. However, you may visit "Cookie Settings" to provide a controlled consent.
Cookie SettingsAccept AllReject All
Manage consent